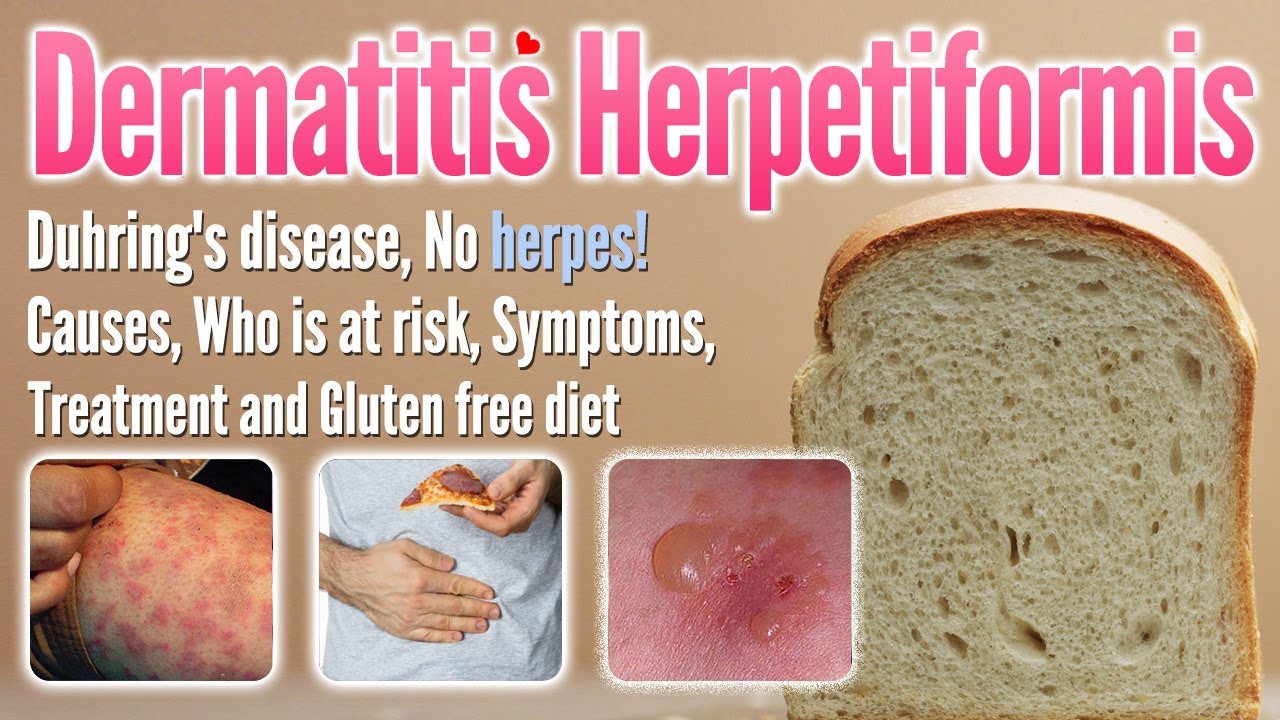 Dermatitis herpetiformis, also known as Duhring’s disease, is a chronic skin condition caused by a reaction to gluten ingestion. It causes clusters of small blisters, bump and also itchy skin conditions. Symptoms typically start at age 30 to 40 but can happen at any age. This lifelong condition is rare in children. It affects more men than women.

In this video, we will introduce some information about Dermatitis herpetiformis causes, risk factors, symptoms, treatment.

By the way, welcome to Anatomy Note Youtube Channel again.

Despite its name, the herpes virus doesn’t cause dermatitis herpetiformis. If you have celiac disease and eat gluten, your intestines make an antibody called IgA in response. This chemical flows into your bloodstream and builds up in blood vessels under your skin. It triggers the DH rash.

Dermatitis herpetiformis predominantly affects Caucasians aged 15–40 years but may occur in those younger or older and in other races.

Men commonly get it more often than women.

More females under the age of 20 are affected than males.

Some group people who have autoimmune diseases like autoimmune thyroid disease, type 1 diabetes, Sjogren syndrome, and lupus are prone to get dermatitis herpetiformis.

Dermatitis herpetiformis looks like a cluster of itchy bumps that can be easily confused with acne or eczema. Blisters can also form, and you could be misdiagnosed with herpes.

Dermatitis herpetiformis is not contagious.

Gastrointestinal problems also may present because of celiac disease. these symptoms include bloating, cramping, diarrhea, constipation and pain.

Can dermatitis herpetiformis be misdiagnosed?

Sometimes dermatitis herpetiformis is mistaken for herpes, scabies, papular urticaria and other types of dermatitis. Your healthcare professional may need to test your skin to determine an accurate diagnosis.

Treatment will depend on your symptoms, age, and general health. It will also depend on how severe the condition is.

Usually, dermatitis herpetiformis is treated with a gluten-free diet and an oral antibiotic called dapsone. If dapsone doesn’t help, your healthcare provider may prescribe sulfapyridine or sulfasalazine.

A strict gluten-free diet is effective for both dermatitis herpetiformis and the associated gastrointestinal manifestations.

topical corticosteroids may be used short-term to lessen the intensity of the itching, but do not suffice as a long-term treatment.

Patients are usually managed by a dermatologist for the management of dermatitis herpetiformis and a nutritionist for dietary counseling.